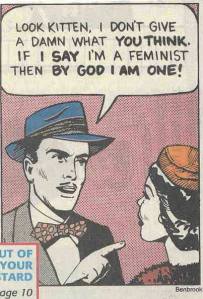 In recent months, a new cohort of celebrity male “feminists” has jumped onto the pop-culture scene. With Emma Watson’s “He for She” campaign and Aziz Anzari’s viral “David Letterman” appearance, male feminism, once an oxymoronic term, is suddenly en vogue. Cisgender men, especially cisgender men in the public eye, are declaring their support of feminism and pulling in praise and adoration from all corners of the Internet. Don’t get me wrong, I think it’s important for cisgender men to self-identify as feminists, but it’s time for these men to put their money where their mouths are.

Male feminists need to realize that feminism is not just an identity; it is an active practice. Womyn can achieve this active practice by resisting patriarchy within their own lives. It is a radical practice to love and respect oneself in the face of misogynistic propaganda and structural violence, let alone to deconstruct the social systems that create this propaganda and violence (this does not mean that womyn’s feminism is in anyway limited to self-care and consciousness raising). Additionally, patriarchy pervades female experience down to the micro level, making even small, private triumphs true acts of resistance. In contrast, patriarchy does not negatively impact male experience on the macro level. This requires men to resist in active and public ways.

Since misandry (barf) is a myth and cisgender men do not face structures of oppression because of their gender, they are required to fight patriarchy outside of their own lives to have their feminist credentials approved. A cisgender man who claims feminism just barely meets the baseline for not being an asshole. The act of claiming feminism is not feminism itself and it is by no means praise-worthy. Going further, the act of saying that you support equal pay or respecting your female family and friends does not make you a feminist, it makes you a decent person. When men claim feminism without actually working to deconstruct patriarchy, they’re having their cake and eating it too. They are reaping the social adulation of an identity which is currently very trendy, while profiting off of the political, economic, and social oppression of women that has existed and will continue to exist for hundreds of years.

To be a true male feminist, you need to do something about patriarchy. You need to join the movement (be prepared to follow, not lead). I know this is scary, get over it. Womyn have been organizing around these issues in the face of violent oppression, economic exclusion, and social isolation for centuries. A slap on the wrist by a conscious peer is the biggest risk you face in the feminist movements. Even if this does happen, take it as an opportunity to learn from your mistakes.

You may also be asked to stay away from certain feminist spaces, as it is important for womyn to be able to share and reflect on their experiences without the triggering opinions and invasions of men. When asked to leave, do it. This does not require you to totally retreat from feminism, but to avoid certain safe spaces within the movement. Remember, despite what society has taught you, your thoughts and contributions aren’t always important. Plus, there are plenty of spaces that you can work on making safer for feminism, rather than occupying spaces that are already protected.

If you can handle these basic stipulations, there are a myriad of ways for you to get involved. Attend a march or a rally, volunteer at a reproductive health clinic, fundraise for womyn’s shelters, challenge the misogyny of family and friends. Just do SOMETHING, if you insist on claiming the identity.

Once you find that “something”, throw yourself completely into it, without concern for praise or reward. Be so fulfilled by the activism itself that you don’t need to be thanked for the difference you are helping to make. Know that you are working to deconstruct violent and unfair systems and be satisfied with that. Your reward for your feminism is not a Jezebel post or pop-culture praise, but a freer and fairer world for womyn.

So my fellow male feminists, its time for us to step up to the plate, shed our frail egos, and take a true swing at patriarchy.

Vincent DeLaurentis (SFS’17) is the Vice President of H*yas for Choice and a dedicated male feminist.